Another Day another Dolla

Scott and I went out for a run tonight. We actually got out there before it was dark.

I swear my 85 year old neighbor is trying to pick up on me. As we are running down the road he's driving the other way and tells Scott I'm looking like his (Scott's) daughter. Gotta love it.

I figured out how to set up a pace time on my Runkeeper where it will tell you if you are running at the pace you set. I think this would probably be more effective if I had changed my audio cues to go off more often. I set it for an 11 minute pace. I ended up running & walking a 10:26.

I ran too fast and had to walk some to catch my breath. Hey I made it under 11 though right? I guess I should try for under 10 so I can get that 30 minute 3.1. I got so close one time but then I switched to focusing on longer distances and lost my short run endurance.  We have 2 5k's we are signed up for so it would be awesome if I could do it.

it's only 2 1/2 minutes and I have almost a whole month. Maybe just maybe I can do it! 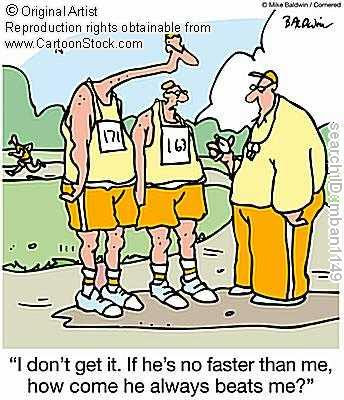 In other news, when I asked Scott if he was going to be able to fix the washer tonight he said he already did. (yesterday). Um yeah well thanks for telling me? I'm walking around with my droopy ass 2nd day pants because I have no clean clothes.

Guess I should go out and wash something now.
In a minute yeah yeah.

We're Scott and Trevor are also watching a nice flat screen TV that I bought from my co-worker for $100 today. The old dinosaur is decorating the living room at the moment. (my bad I thought he took it outside but I guess not).

So all is good in our little world now.

Melissa's high school orientation/registration is next Monday (I KNOW how is she that old??) so that will be a good $200. $75 just for a year book. Better buy it now because the price goes up if you wait. By the time Trevor goes to high school a year book will probably be $100. Ridiculous. Can't they just use those Shutterfly coupons I'm always getting emails about?

I'm still waiting for a letter about the bus. I might have to breakdown and call someone. The last time I paid for it for Jessica it was $360 a year. That was a few years ago so I'm guessing it's at LEAST $400 now. Good thing they let you break that up into two lovely payments. If only I worked in the same direction as the high school I could just drop her off. Nope. That would be 25 miles out of my way. Easier to pay the money and save on gas.

Tomorrow is already Thursday. This week has pretty much flown by. Hopefully the next 2 days do too. So much work to do it makes  the days go faster. I guess I should be grateful for that!

Wow! You have to pay for the school bus? Are you out of district? Obviously I'm out of the loop because I didn't know there was an extra charge for that. I thought districts had to provide transportation to keep a level playing field for all students.

1. You can absolutely get your 5K to less than 30 minutes. You are Super Julie to me and so you can. So there.

2. $75 for a yearbook?! When I graduated ours were about $30 a year and my mom thought this was outrageous. I bought my own 10th-12th grade because my mom was like HELL NO.

3. You have to pay for buses?! Public school busing is free here. I try really hard not to complain about what we have to pay for in regards to supplies and stuff because it's nothing compared to everywhere else. It's like schools are afraid to make parents pay for something because they will lose their shit. They tried to rearrange buses so some kids would leave school 15 minutes early and some would have to stay an extra 15 minutes and this was going to eliminate the need for half of the buses. Parents were OUTRAGED and it never went. Our school board is terrified of parents.