This afternoon I got dinner all ready to go and put it in the oven. I didn't turn it on though. I just had everything all set. Because I had a plan.

Scott takes the train to work and back every day and I decided that I'd ride my bike into town to meet him when he got off the train. That way I'd get some calories burned and could be all like SURPRISE!

So I went on my way and instantly I'm thinking this was a stupid idea. It's windy (like usual) and I'm riding straight into the wind. Oh well suck it up buttercup as Scott always tells me. I kept thinking well when I turn maybe it won't be as bad. Well it was. Is it possible for the wind to come in two different directions? I'm pretty sure that was the case.

I was thinking I might not have left early enough to account for the wind slowing me down. I was thinking well at least he'll pass me going the other direction if the train gets there before I do. 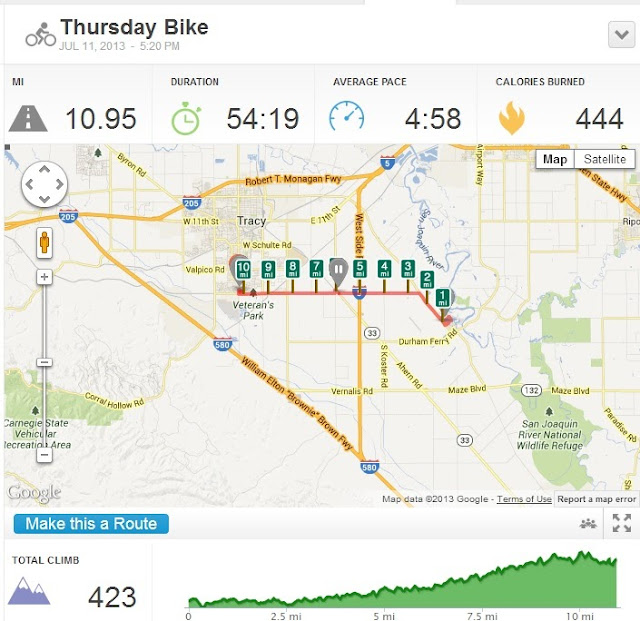 (look it was uphill too!)

But I did get to the station before the train. I rode up and down the parking lot looking for the truck. No truck. WTH? I was hoping that someone didn't steal the truck again. That would suck. I didn't quite go down ALL the rows so when the train pulled in I thought we'll I'll just keep a look out for Scott.

I'm like great. So I call him and he's almost home. He had drove to another train station this morning because he was running late. I was like soo I rode my bike here so now you have to come back to town and pick me up. (I so wasn't planning on riding back home, although the wind WOULD be behind me).

He said he'd come get me and then I sent a text to Melissa to turn on the oven and the stove to steam the broccoli. When we got home WAHHLLAAA dinner was done!

Great plan if I do say so myself (although the vision of him smiling when he saw me sitting on the tailgate when he walked up obviously didn't happen-I should probably stop listening to romance audio books..)

I made this recipe for Monterey Chicken. Sadly there are no left overs for work. Which means everyone liked it! Well everyone but probably Melissa I think she picked hers apart. I even left off the BBQ sauce on hers. She's not a saucy kind of girl. Unless it's ranch.

The recipe says to grill the chicken first but obviously I didnt do that.  I just put it all together and then baked it in the oven at 350 for about 1/2 an hour. (and I used real bacon) 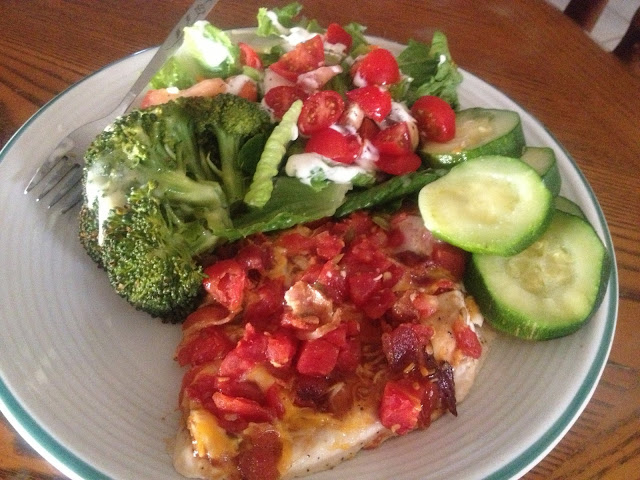 It was super spicy for me so I used a bit of light sour cream to calm it down a bit. Pretty good though! I know I've made it before but it's been awhile. Definitely a keeper!

Tonight is supposed to be gym night but Scott is sawing logs in the recliner and I'm thinking I'm good with my bike ride I got in. Tomorrow is supposed to be rest day and Saturday is the 10k in Escalon. I haven't ran 6 miles since the last 10k but at least this one is flat. And probably less shade. It's supposed to be pretty warm but the run starts at 7:30am (I think) so if I run fast I'll get done before it's 100 out ;)Pin It
Posted by Julie H at 9:43 PM

Ahhh how sweet..fail on his part for messing with the plans right?!! I need that recipe. Looks delicious!!