I've been so busy this week. Can I just have a few days of doing nothing?? Oh wait I have to go to work tomorrow. Darn.

So just like I thought my washing machine bit the dust. Unfortunately it was before I washed any clothes. I'm pretty sure it's still full of water and clothes from yesterday. I've asked the man if he knows how we are getting the water out? (it won't drain) and he mentioned siphoning it out but I don't think that's actually happened yet. So don't get to close to me because I'm most likely wearing kind of dirty clothes tomorrow.

(and while I'm typing this the TV in the living room just took a dump, gotta laugh or go crazy right?) {oh just kidding it works now, just plug it into another part of the power strip!}

I spent all morning cleaning my ass off for book club. My family all thought I was a psycho bitch for you know, asking them to HELP. This once a month or so when I actually ask people to do something besides sit on their asses is like TORTURE.  I even offered the girls money to help me work in the yard earlier this week and they both turned it down (and I'm not talking about single digit dollars either). I'll remember that when someone needs some money and I'm not even kidding.

Everyone was also all bitchy because they had to leave the house for 2 hours. REALLY? They had plans to go to the movies. OMG TORTURE.

I set us up in the kitchen. I was going to buy some flowers to put on the table but I forgot so I just snipped some of my geraniums and stuck them in little wine glasses. 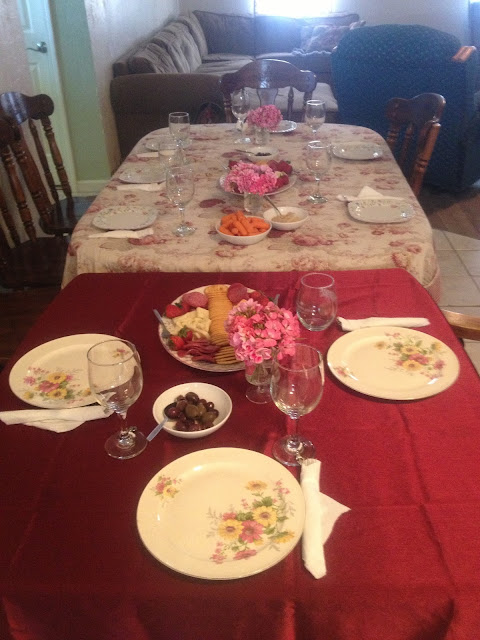 Buster kept breaking out of my room where I had put him because he was way too interested in the table so when we were almost done I let him out and he got some loving. 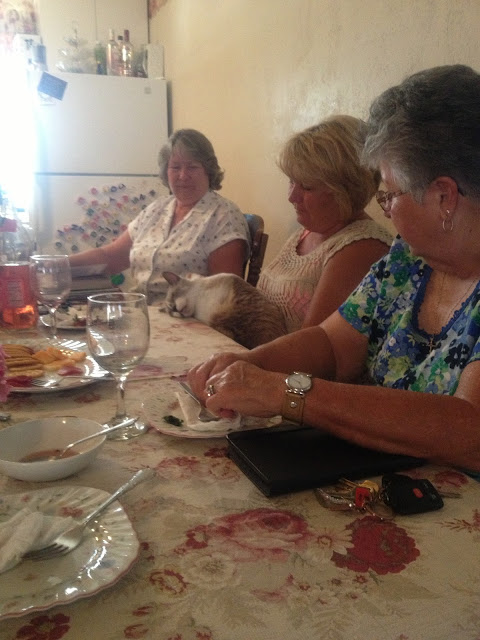 Silly cat. He was rubbing his face on the table even though it looks like he is zonked out from too much wine!

Two hours and we were done. Ahh one hour nap on the couch and then drag myself into the kitchen to make dinner.

I thought for about 15 minutes they were going to be a total flop but they turned out ok. Instead of making my own pizza dough (who has time for that??)  I used 2 pre-made tubes. When I went to roll the chicken mixture it was kind of messy so I ended up just kind of plopping them into the muffin tins. I didn't use about 1/4 of the dough that was on the ends since I didn't have any chicken in them. They turned out to be about 103 calories each and were pretty filling. Everyone liked them too, score!.

Of course mine looked nothing like the picture. I also slightly overcooked them because the first time I checked them they looked too doughy. 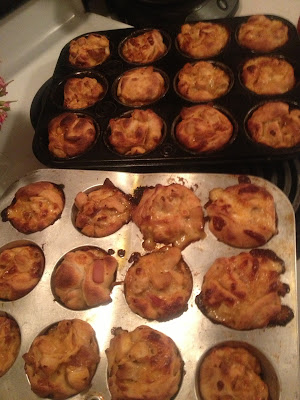 Family's suggestions were to next time add olives, pepperoni and mushrooms.

Off to read a few blogs and then hit the hay. It's already almost 10pm. It sure is nice and quiet without the TV on in here though!Pin It
Posted by Julie H at 9:52 PM

Doesn't that about piss you off when you want something..NEED something it is like giving them an enema for volunteers! Even the money offers don't work. WTH!! Spoiled families. UGH!