Today was the "travel ball" tournament (the first of many) for Jessica. This one wasn't too far away so that was good. We asked Grandma to watch Trevor and Melissa went to her friend's house to play and spend the night tonight. Just having Jessica is like being on vacation!

We got to the field at the required one hour and fifteen minutes early. Nothing like spending ALL day at the ball field. This place was pretty nice. On the website it says no outside food, only one cooler per team for drinks only. So we didn't bring any food except for some waters Jess put in her bag.

The first thing I notice when we get there is coolers everywhere. People have food and drinks from all the local fast food places. Guess they don't enforce that rule much! So first lesson learned is that next time we pack a cooler and at least stick it in the car if nothing else.

The games here were only one hour long and then they called the game over. That makes for some quick games! The first game Jessica played 3rd base and did a great job! She didn't do too well with batting though but I'm sure that was all nerves. They lost their first game :O(

Between the first and second games we went to the grocery store and got deli sandwiches. I think we spent as much as we would have getting fast food somewhere, and they weren't even all that great. Another lesson learned I guess!

The second game Jessica played catcher. She was so nervous and the girl that was pitching seemed a little wild. Jess really beat herself up mentally during that game. I felt bad for her but nothing she could do and she did do a good job. She didn't get any hits or on base in the 2nd game either but hardly anyone else did either.

Between the second game and the third game we had two hours to kill so we just hung out on the grass. I read my book a bit and we chatted with some of the other parents. Jess went with another girl's family to get some ice cream.

Third game Jess played third base again. The whole team seemed to really choke a lot. They lost that game too, although she did get walked so she got on base and a run came in.

After the game was over the coaches made them run around all the fields because they lost? Yeah that's the way to keep up the team spirit. Whatever. I don't really get it. They had played 3 games, been there all day and it was hot and they all felt like crap because they had lost so lets make you run...

So this was my first time being around all these kids and parents on her team since I always just drop her off for practice. One guy was pretty friendly but seemed a little weird. I dunno, didn't really get him. His wife wasn't all that friendly but they are the ones that took Jess for ice cream so they can't be all that bad.

No one was very friendly but then again maybe I wasn't either. I dunno. Hopefully I connect a bit with some of the other moms so I'm not just sitting there not talking to anyone all the time. It's more fun when you are all kind of visiting.

Tomorrow they the "playoffs" for the tournament. I'm hoping we don't have to be there for the 9 o'clock game since that means no sleeping in at all! They are supposed to call tonight and let us know.

Here's my girl catching during the second game. 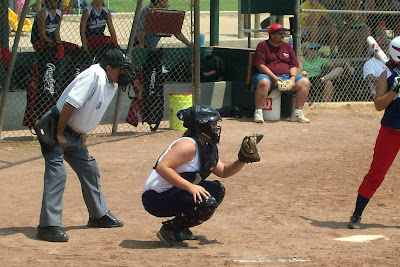 A few more things I noticed during my day there.

If your child is about 8 years old, she is too young to have acrylic nails and a fancy pedicure. I'm sorry, there is no arguing on this. She is just.too.young. Oh and the pink in her hair, that kind of makes her look trampy too when you add it to her nails..

If you are over the age of 12, you should not wear multi colored butterfly clippies across the top of your head. Really. Look around, see any other adults wearing things like that?

If your daughter acts like she hates softball, she probably does. So you should probably not make her play anymore. Even if you ARE the coach.

When someone makes a bad play, you don't have to scream at them and tell them what they did wrong. They already know.

If your kid is playing sports, you really should make some kind of effort to come to the game. Really. At least SOMEONE from your family should go. It's sad to see the one kid with no one there to root them on.

Well that's all I have for today. I'm sure I'll find something else interesting to talk about tomorrow!Pin It
Posted by Julie H at 8:34 PM

So what are your thoughts on almost 40 year old woman that want pink in there hair? Mid-life crisis I think. I haven't done it but I think about it.

Im a little embarressed to say, my 4 year old wears acrylic nails during the summer, for nationals...and ive seen 20 yr olds with the whole butterfly thing in the hair. im not judging, just saying...

As for the pedicure, so is it wrong that I just went and bought a nail file so I could give Miss M a little pedicure and paint her nails? Cause I was thinking that would be kinda cute ;)

Jared, well I think that is probably different since it's for the pagent.

Tonya, I think doing it at home is different.

More of what I was getting at is this little girl looked like she was trying to be 16 instead of 8 IFYWIM. And I'm sure she didn't pay for all that stuff with her own money.