We left Sunday night to go to Vegas. Why do the airlines want you there 2 hours early? Just to make the airport look like a popular hangout? We were there plenty early and even had time to have a meal. Our waitress was someone's Grandma and kept referring to us as "you two".

After eating we went over and went through security (this is a really small airport) and then sat on the other side of the "wall" waiting for the plane. It was a little late. They REALLY should put some bathrooms on the secure side!! Anyhow, the plane got there, we got loaded up and we were on our way! It's only about a 50 minute flight to Vegas from the little airport. Here's a pic from when we got into Vegas. 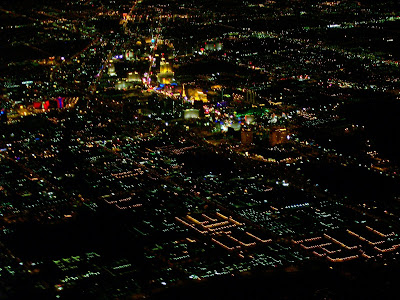 We only took carry on luggage so we got out of the airport real quick. We got on our "shuttle" to our hotel. We thought for sure we were going to die before we got there. This guy was obviously practicing for a Nascar race. We were sitting in the back of the bus and I thought for sure I was going to chuck. When we got out got down on our hands and knees and kissed the pavement. We stayed at the Excalibur. 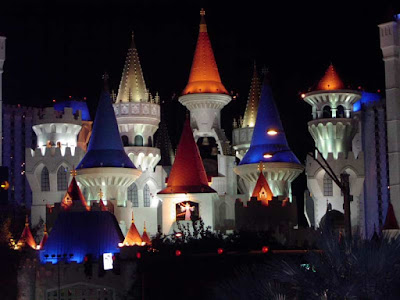 This was our first time staying there. We were on the 2nd floor and had a view of the bushes and a work type area, it was sooo pretty that we kept the blind down the whole time we were there! After we got there we went and walked around a bit and played some slot machines. I think we ended up over at New York New York. That is such a cool looking hotel on the outside. 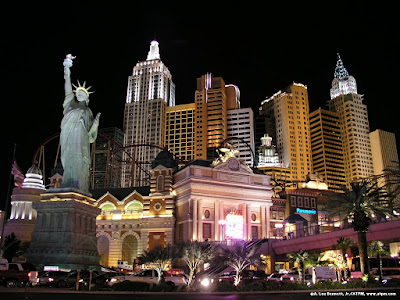 I must have been in a bubble last time we went because I swear I never saw one Hooker. This time they were out in force! We stayed up until about 2 then went back to the hotel and went to bed. Monday: We got up the next morning at around 8 or 9 and went out to the Round Table Buffet for breakfast. It wasn't all that great. We went and walked the strip a bit. OMG we walked for like EVER and stupid me wore flip flops. Eventually we ended up at a mall where we got some water and some toiletries we forgot to bring with us. Then we found the monorail to get back to the other end of the strip.

The Monorail is pretty cool. For $9 you can get a 24 hour ride pass. Definitly worth it! It makes like 7 stops along the back side of the strip. We rode it all the way to the MGM which is the last stop. 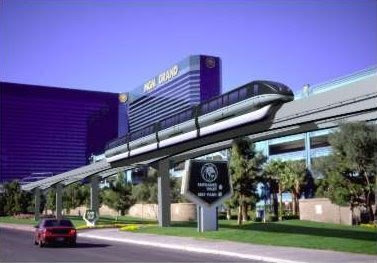 Then you just have to walk aross the walkways to get back to the Excalibur. On they way back we stopped at the Coyote Ugly little outside bar area and got 2 of those freaking huge drink bong things lol. Scott got the Hurricane and I got the Strawberry Margarita. He was freaking drunk and me, well NOTHING. WTH?? That was a $15 drink plus tip lol.

Here's Scott saying "It's all good" which he ONLY ever says after he's drunk lol. 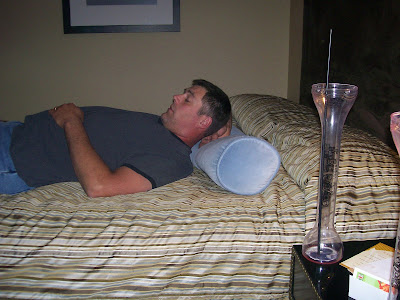 We had tickets to see the Wayne Brady show, which I THOUGHT was at the Sahara. I had planned that we would go to the Nascar Cafe before the show. We got all the way to the Sahara and I realized he was at the Venition. UGH. So we needed to go 1/2 way back down the strip since the Sahara is at the very end. We decided we'd just eat at the cafe real quick and then make our way back. We got over to where the cafe was and it was freaking CLOSED! It was supposed to be open until 10! Not sure why it was closed because I was pissed that

1.) We were at the wrong place for the show and

2.) Our dinner plan was messed up.

We went to the Sahara buffet since we were there and OMG it was soo old and crappy looking in there. The food wasn't that great either. I think I had like a piece of meat and a diet coke for dinner. We were in a hurry too so that didn't help.

After we ate we had to jam back to the monorail and when we got on I was looking at the stops for the Venetian. I backed up to sit down and WHAM fell right on my ass lol. There was no seat there. Scott isn't going to let me live that one down for awhile but I was cracking up anyways.

We had to get off at Harrah's and then go through the hotel and out the front and then down a bit on the strip to get to the Venetian, which is a BEAUTIFUL hotel. My legs were so sore from walking all day I was really hoping someone could just give me a piggy back ride the rest of the way! 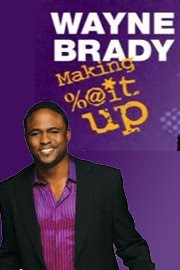 We made it in time to see Wayne! We didn't pay for the more expensive seats and turned out we were only one row up from the higher priced ones. The theater wasn't all that big either so we weren't too far away. It was a pretty good show with lots of dancing and music. He did a lot of the bits they did on Who's Line Is It, Anyways. Here's a few pictures from the Venetian 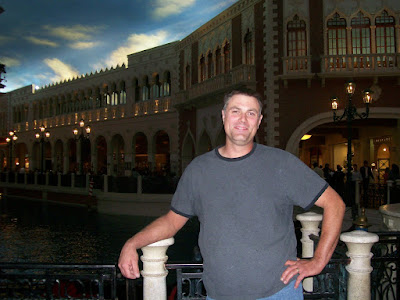 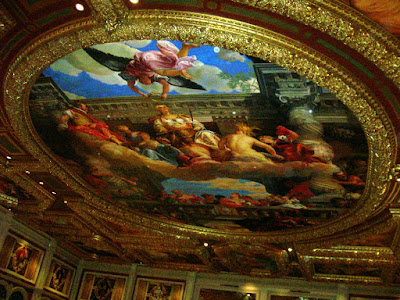 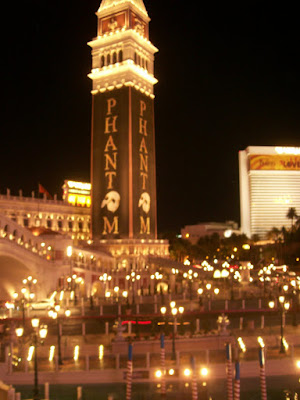 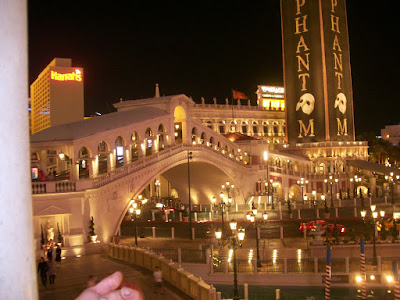 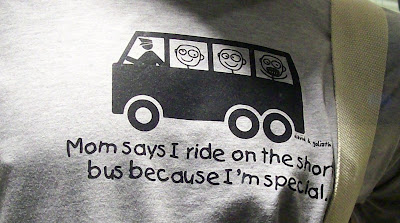 We played the slots some more and I found this machine in the Excalibur only the one I was playing was a penny machine.

I freaking won $200 on a penny machine!! So was so freaking excitied lol. We stayed up playing until 5 in the morning. Weird how you can just get a second wind and not even get tired.

We slept in until 10 or so, think we finally made it out of the room around 12. We went and ate somewhere, can't even remember where now and then just played slots in various places. 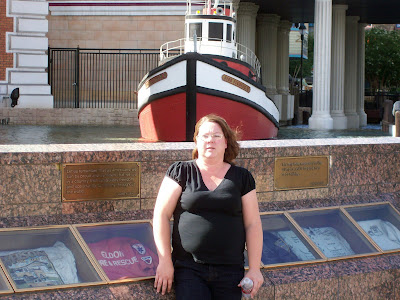 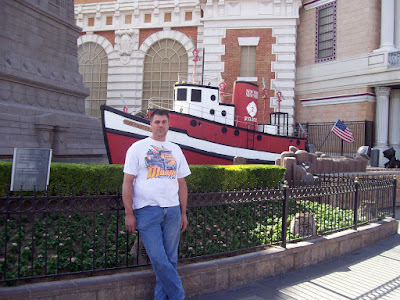 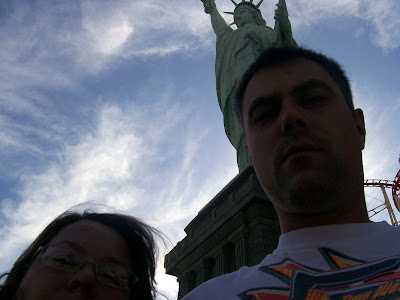 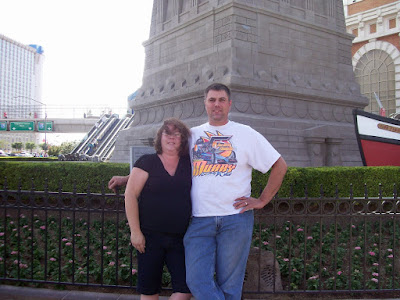 We came back and got our big drink cups and went back for refills ($9 instead of $15). This time he got the same thing and I got the Margarita with an extra shot. Scott said my extra shot was at least 2 shots lol. We went over to the Tropicana where we had tickets for the Comedy Stop. 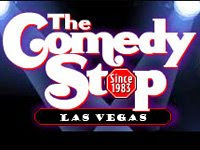 Our tickets came with a free drink. I had just finished my big ol' margarita and was feeling no pain so I went and got us each a tequila sunrise. Scott for some reason wasn't even buzzed from his drink. The show was really great! Afterwards I stumbled out of the Tropicana and over to our hotel. Where I had a freaking giggle attack that wouldn't stop lol. Scott took a video of it, which after the kids aren't around I'll view and see if it needs to be permanently deleted lol. (here it is)

After I sobered up a bit (guess I was kind of embarrasing woops lol) we went back down to play a bit. Scott was all bummed that he couldn't seem to win anything. I was really hoping he'd just go to the room and leave me alone lol. Eventually I got my wish. I sat and played the leprechan machine for awhile but it wasn't loving me anymore and then went and played another penny machine where I was up a bit and finally stumbled into bed at 2.

We had to get up at 5 for our 5:30 shuttle pick up back to the airport. This time the shuttle driver wasn't a crazy driver! We went through security, made it inside and finally settled on Starbucks and Cinnabon for breakfast. YUM. Crap and crap lol.

We got home at around 10 where Scott instantly turned from fun husband back into asshole husband. I'm hoping it's just being sleep deprived (although he slept most of the day after we got home). Hard to be nice when someone is pissing you off lol. Tomorrow he has to go back to work and I get to clean house. YIPPEEE back to reality lol. Edited to add, spell check doesn't seem to be working and I'm too lazy to go back and read so enjoy my mistakes :O)Pin It
Posted by Julie H at 8:38 PM

Woohoo, what a great trip. I need an adults only weekend away there, I'm so jealous.

So the real question is how many 'cards' did you collect along the strip ... ;0

LOL got to love the :snap:snap: boobie cards.

I'll let you see mine if I can see yours, maybe you have the Tiffany one I'm missing...

I love the Bellagio in Vegas - too expensive but I love it there. Glad you had fun!

Wow...what great pictures. I'm jealous..never been to Vegas, but looks like a blast!

It sounds like so much fun!! I like that monorail too. It beats walking the strip in the heat. Blarney is cracking me up. When my husband and I went, I made it a point to collect all the cards and hand them to him. He had probably 50 by the time we got to the Venetian.

Keys to the Magic Travel said...

Thanks for sending me your Vegas link! I wish we could have seen Wayne Brady...but he is doing the Let's Make a Deal now. The Venetian still has posters advertisting for it. I wonder if he'll go back to that when his show is on hiatus...