Now I know why they cry


So you know when you watch the Biggest Loser and the people on there are just bawling their eyes out because they "JUST CAN'T DO IT!"? I so understand that feeling now.

Sunday was the Mendocino Monster Ride that we had signed up for.

We got up nice and early and then went over to the hotel lobby. I had a bagel with some peanut butter and a banana. Scott had a full breakfast. Sadly they did not have any coffee made so I went with no coffee for the day. After we ate we got on our bikes and rode over to the college where the ride started (about 1 1/2 miles or so). When we got there we realized we could have just started the ride from the hotel because there was no official start line or timing. DOH. We could have saved ourselves those 2 miles.

So we rode back out and got on the "ride". The ride was on Orr Springs Rd. Like the whole ride. It started nice and then got ugly real quick. Like straight up a mountain. Scott was having a hard time catching his breath and his knees  were hurting. So we would ride up each small section and then take a break. Over and over and over again. 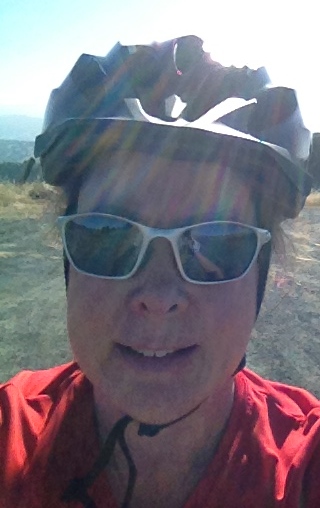 We kept hoping that around that next bend would be the downhill but it didn't ever seem to be there. FINALLY we went downhill and were rewarded again with another horrible uphill climb!!  We were both cussing up the freaking hills. I may have mentioned that we could just be quitters and quit. I was only half joking.

Eventually we finally got up to the mountain peak and the ride was much easier. We made it to the first rest stop and had a few snacks, used the port o'potty and then got back on the road. We continued on and eventually made it to the half way point, our turn around (other people kept going another 15 miles into Mendocino).  That was also where we had a light lunch.  I had half of a six inch subway sandwich, a bag of chips and some m&m's.  We refilled our water bottles and then started riding again. 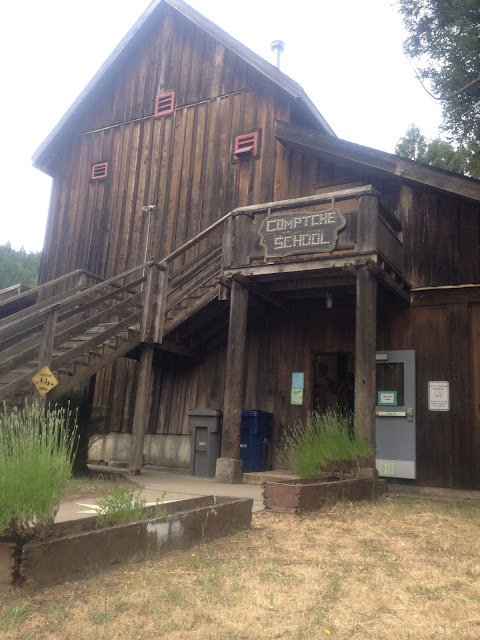 They opened this little school for us to use the restroom isn't it cute? 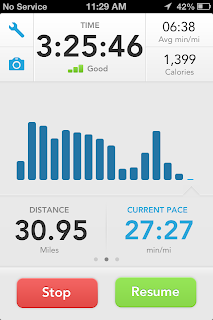 The stats on my phone half way through 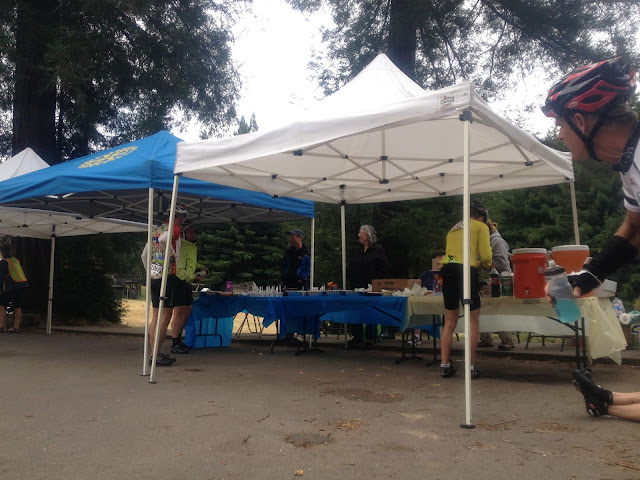 We hit the next rest stop. Scott was almost out of water and so was the refueling station. They kept saying it was on it's way but it wasn't ever showing up so he just wanted to go. I was laying down on the seat part of a picnic bench telling him I could wait awhile to get back on the road. At that point I was just.so.tired. He was agitated about the water being out and just wanted to go so we did.

I told him I wanted to stop at this wood bridge to take a picture, it was so pretty. 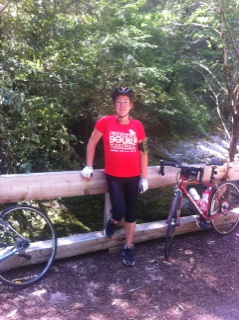 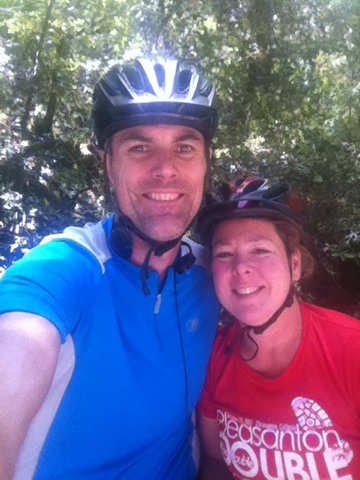 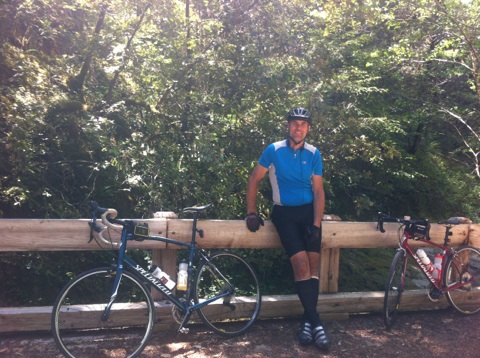 Not too long after that I think I hit "the wall" that people talk about. I was just SO TIRED. Scott seemed to be doing great and was riding up a ways from me. I kept feeling the big tears coming on. Eventually I just stopped and let them flow. BIG huge sobs. The ugly cry. Scott stopped up a ways from me and just waited while I had my melt down. Eventually I pulled it together a little bit and rode up to him and then let it go again. "I'm just so tired! I don't know how I'm going to make it over that hill again!!" I sobbed and sobbed. (Did I mention that this was mile 49?)

Scott gave me a pep talk and told me we'd just break it down. "Just try to make it up to that pole up there" he told me. So that's what we did. All up the mountain. We'd pick a focal point and just try to make it that far, take a break, and then make a  new point and ride to it. At one point we were almost to the top and one of the support trucks stopped and asked us if we were ok. We told them that we were and they offered us a ride. We both said "NO!" We'd made it that far. There was no way we were giving up now. 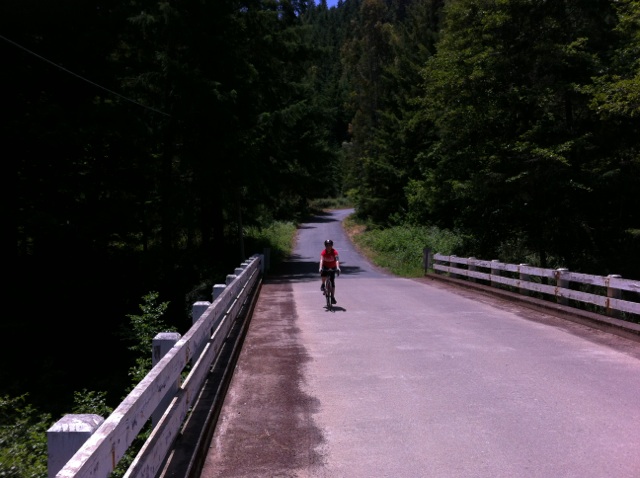 Scott took this of me coming down one of the hills

There was a promise of Popsicles ahead and Scott was so focused on getting to them. The support people told us that they'd make sure they waited for us. I thought that was pretty nice of them. We were obviously  towards the last of the people on the ride.  Personally I really wanted a nice cold margarita at that point. We got to the Popsicle stand and they started tearing it down while we were there. Someone was saying that there was one more person on the road behind us and while we were eating our Popsicle he rode by. Damn it! We could have not been last haha.

From the Popsicle stop there was only about half a mile more of uphill and then FINALLY we were to last 5 miles which were all downhill. Thank God!! 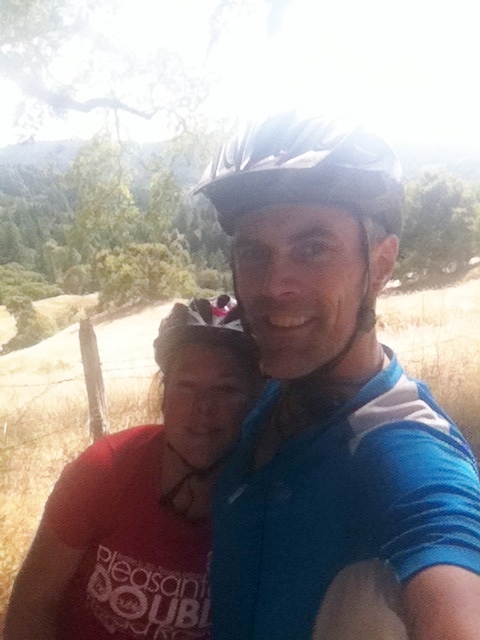 Almost to the top 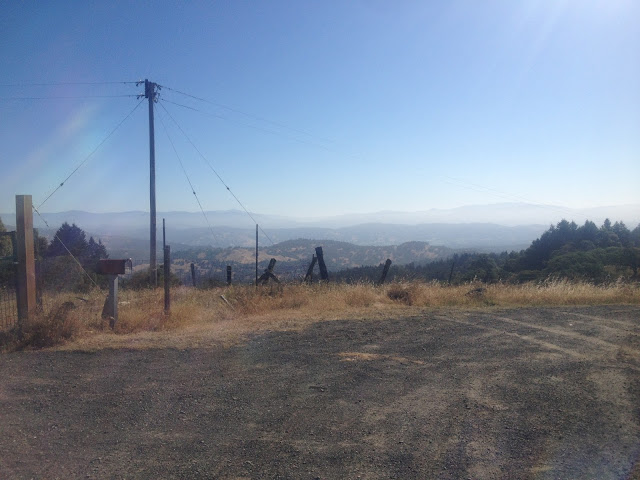 We rode up to the college and the bbq that was almost over. Most people were looking really relaxed and had changed their clothes. We looked worn out and half dead! Well at least I did.

That was seriously the hardest thing I have ever done. Maybe including twelve hours of back labor before Jessica was born via c-section. At least I had a steady stream of drugs while I was doing that.

I told Scott I am never ever doing that again. I'm writing this down here so that the next time I sign up for something so stupid you can all remind me that I said that. Distance is one thing but climbing mountains is a whole different ball game! 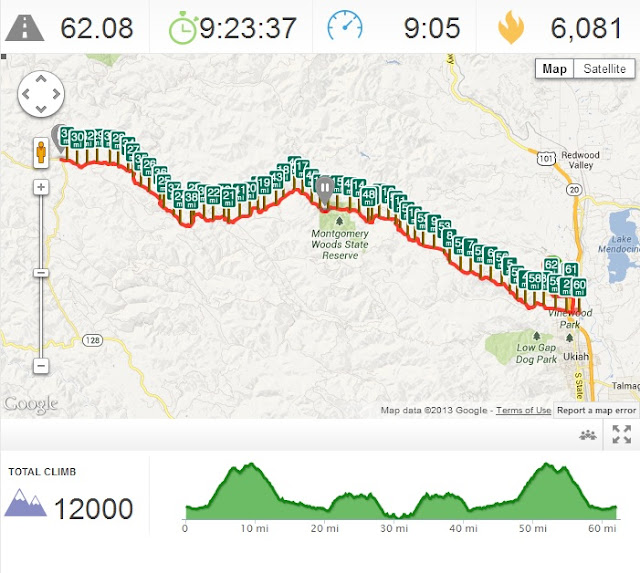 At the bbq most of the food didn't look too appetizing to me so I had a piece of chicken and a coke. We sat and ate and this one gal came over and was talking to us. She was telling us about all the rides she has done and how when she was a teen she did that ride spur of the moment like with some friends and how it didn't even seem to be such a big deal.

I didn't kill her. But I kind of thought about it.

We had to ride our bikes back to the hotel when we were done eating. I was so sore it hurt to sit on the seat of my bike. Thank God it was mostly down hill to the hotel.

We got there and I had a drink and sat for a little bit. 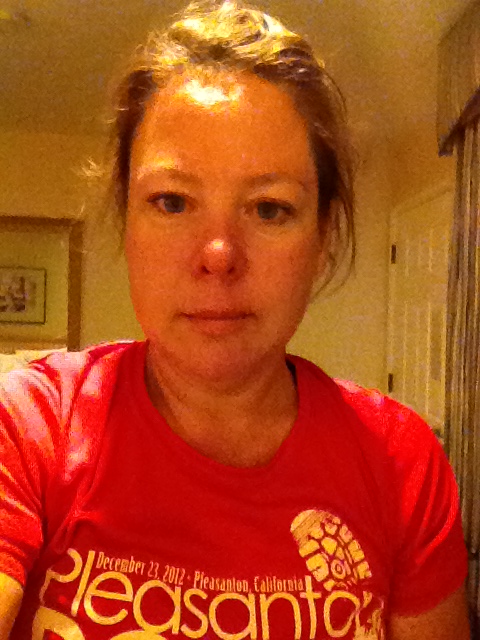 I have never in my whole life been that tired. EVER.

We may have come in last and half dead but we did it. We rode the whole damn thing all 62 miles (plus about 3 more!)

We changed into our bathing suits and went down and sat in the hot tub for a little bit and then came back to the room. Scott gave me a massage while I complained about how tired I was. We watched a little TV but I'm pretty sure we were both asleep by 9:30!

what an absolute Legend!! you have done something so awesome and challenging that some of us wouldn't even have the guts to sign up for. Well done Julie and Scott!! <3

I cried just reading this!!!

You are awesome! It may have been hard but you did it!!