Good morning happy Monday! I'm procrastinating big time and it will bite me in the ass in a few hours lol. I'm off work today to bake cookies with the girls. Trevor is currently sick but so far the girls still want to come over. I've been downing more Emergen-C in hopes that I do not get his creeping crud.
I still need to go to the store and buy cookie ingredients but first I have to unpack my car from my event yesterday. And get dressed. And at some point wash these dirty dishes.
Scott and I went Christmas Shopping on Saturday. After about 5 hours he was acting like he had ran a marathon and could barely go on. WTH. We had to come back anyways so he could go feed his mom. I was going to go to town so we could shop some more but decided against it since we had already hit Wal Mart and Target in another city and that is all that is open late in our stupid town. Plus I had to get up for my craft show in the morning.
Trevor got a Christmas tree for us while we were gone so that was nice. It still needs to be decorated though lol
I got up early and got my car loaded. It was a little foggy on the way there but not too terribly bad. I had a spot in the front area this time. I was grossly disappointed when I saw said spot when I got there. One side is like a ditch and it's uneven. Rose bushes on the other side. There was dog crap somewhere mixed in with the grass. I never fully found where it was but I had some on my shoes when I got home. The person in front of me never made it so I was the only crafter out front. There was a food truck on the curb and 2 food vendors on the other side of the side walk so at least that got people to find me. I most likely won't go back to this place again. The inside booth areas are too small and the outside flow just isn't that good to get people to find you. I was thinking yesterday they'd be better off setting up people in the parking lot. 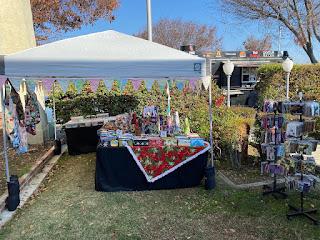 I sold quite a few wine bags, a tote bag, and then miscellaneous stuff. 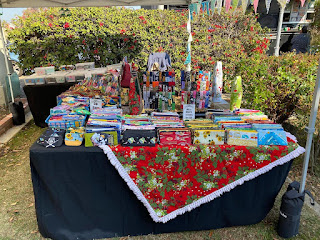 Somehow it seemed like I came home with more than I left with lol. 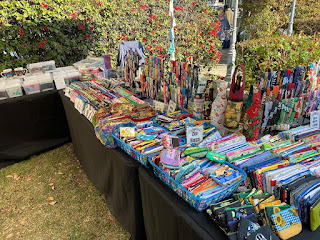 Sold quite a few cup cozies too, Down 1 more box for sure but might be able to condense some more since someone came and bought a bunch more after I had cleaned them up when it was slow. 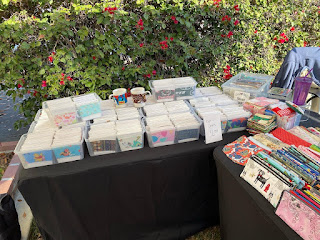 Sold some coasters and some mug rugs that I've had forever so that was good. 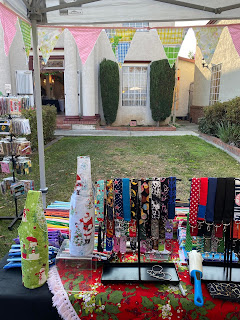 Lunch. $17 with a can of soda. Crazy. Mostly ate the meat off the top since Mac & Cheese is ok but that was a lot of it. 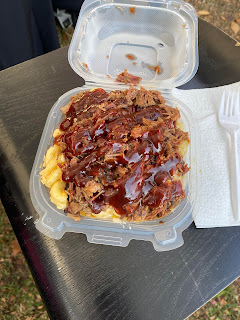 Ended up packing up early since it was dead and getting dark anyways. I was pulling out to go home about the time we were supposed to just start cleaning up. I stopped to go to the bathroom at McDonald's on the way home and some woman started screaming and got escorted out so that was fun. There was a patch where it was really foggy on the way home but then it cleared up so that was good. It would have been stressful if it was like that for the whole ride home. Sucky part about living in the country.
Ok guess I should get myself rolling a bit. Already had to go outside three times this morning, two for the dogs and then to put the trash cans out. Can't wait til Scott gets that job back again. (Actually he used to do both in the morning AND make me coffee, I didn't know how nice that was lol)
Oh and just had remembered to add that my mom texted me that she is not going to be able to do Christmas at her house again this year. She's been "cleaning" for months and still she can't make it. Rather disappointing but now we'll just stay home and have the kids here for Christmas. It is a lot less stressful that way anyways. Well except the I'm cooking more part but that's ok ;)
Pin It
Posted by Julie H at 9:02 AM

Merry Christmas Julie.
Sounds like you better start dinner now...tee hee
Seeing the grandkids Christmas through their eyes should be fun.
((hugs))