Good afternoon! Anyone want to go to the grocery store for me? I am going to go pretty soon.
This guy has been extra clingy and annoying today. Seems to be the way after I've went into work for a day. He's finally settled down now. Snookie has icky belly today, it is making so much noise. Need to give her a GasX that seems to help when she has that issue. 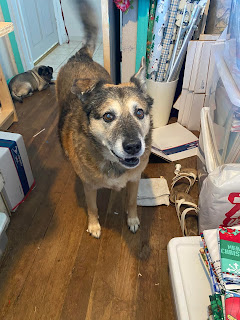 My friend made her Christmas cards with some green buttons (into a wreath) and she was like would you have had these buttons on hand? I was like hmmm MAYBE..

I also have a tin of buttons that aren't sorted at all. I went a little overboard collecting when I was making so many mug cozies. Some day I will sell some of them off to lighten my stash.
Got all my bedding washed last night. This guy was all comfy when I was putting the last two blankets on the bed, didn't bother to move when I put them on. 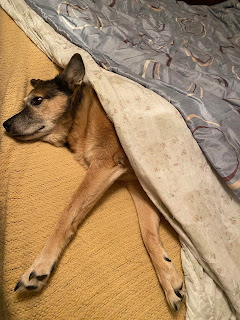 What are you having to eat on Thanksgiving? Making my list
Appetizers-deviled eggs, salami with cream cheese and peppers and a veggie tray
Dinner-turkey, stuffing, mashed potatoes, sweet potato pie, rolls, gravy, cranberry sauce, maybe a bagged salad to act like we're being healthy?
Dessert, pumpkin pie, peanut butter pie and probably a coconut cream if I can find a decent one
I forgot to put my work computer on the dock last night and apparently the battery ran down all the way. Since then it will not charge on the dock and I have to keep plugging it in with the actual charger (I've never had to do that in almost 2 years). It is uber annoying since then I'm stuck with the tiny screen instead of two big ones. Hopefully it will charge up all the way and then somehow start renewing itself on the dock again. We shall see.
We already got the email that we get off 2 hours early tomorrow. So nice that they do that again.
I didn't do anything productive last night, maybe I'll finish up the masks tonight?
Pin It
Posted by Julie H at 1:00 PM