Good morning happy Saturday!
I was wide awake FOREVER from 3-4:30 this morning. Really debated getting up but finally I fell back to sleep.
Yesterday I finally went through a few boxes of stuff I had pulled out of the shed eons ago when I was on a roll cleaning up stuff. I had set this pile by the backdoor thinking I was going to go through it right away but yeah that didn't happen. The bottom box actually had some water in it from when it rained so that was sad. Only a couple things got ruined though. Pretty much everything went into my next free stuff box.  Most of this stuff was from when I had Jessica's graduation party in 2012. That is almost 10 years ago already! Never needed it or went looking for it so I guess I don't need to keep it right? 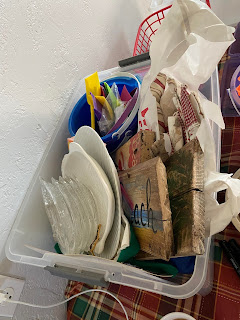 I did keep a little bit since we have a little one that enjoy them now. It will need a much smaller box ;) 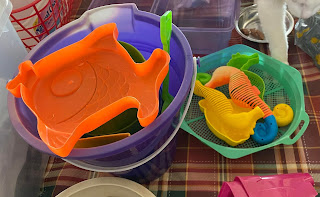 Yesterday's lunch was tomato soup and grilled cheese on sourdough. So yummy. 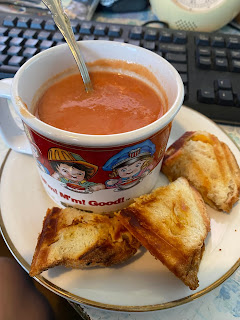 For dinner I made chicken fajitas minus the tortillas because we didn't have any. I just make some rice to eat it over that to bulk it up.
Then we went to darts! Scott was a whining baby the whole time. So annoying. All upset because he wasn't winning. Like WHO CARES. It's supposed to be fun hang out time and you're ruining it by being a little bitch. I was like look around the room is anyone else acting like you? Sheesh.
My friend Cassi didn't come to hang out afterwards since she wasn't feeling well so we were home right after 9. At least being sober saves some money ;) Also probably why I was wide awake at 3am. I need to get a book to read or something so I at least have a good excuse to go to bed early.
Today we have my niece's birthday party! Ava is 10 already. Yesterday was her actual birthday. Just going to give her some money. I think I'll make up a little coin pouch for her and put some money in it. Shouldn't take me long to do that. Might take Daniel with us.
Trevor took my old car to work today since there is something wrong with his truck. Scott has been trying different things to fix it and now thinks maybe it is the catalytic convertor which is super expensive to replace. Kind of wish I would have just bought him a newer used car at this point. The old car needs a lot of work too but he only works about 10 miles away so hopefully it is fine for now.
Well that is all I have for now, Scott is making us breakfast. Still so weird when it is only the two of us home on the Saturdays!
Pin It
Posted by Julie H at 9:17 AM