Wow I hit enter and accidentally published my post with only the title. Hope you came back to read it lol.

So this was yesterday's big job. Yes, you just might be a redneck if you have a pile like this in your back yard. I'm not going to offer any excuses. We are just slobs apparently. 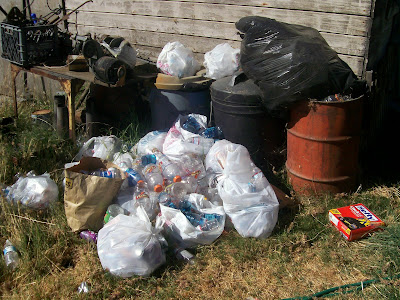 After a couple hours involving a big break where I went in the house to cool off I finaly got this. Too bad only one bag was cans. 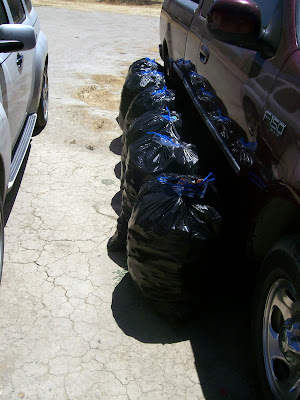 Eventually I got to the recycling center and cashed in my garbage for $56.12. Not bad for a couple hours work I guess! I'd like to get some matching cans that I can actually put trash bags into (the ones we have are too big for the bags) so I can clean up that whole area. Getting a little tired of everything looking like trash de blanc.

Anyhow back to the 4th.

When I was growing up the 4th of July always meant a day at my Grandma's house. My Grandma Marilyn had a dough boy pool in her back yard. We would go over there and spend the day swimming. Sometimes we would go for a walk down to the park for the "day at the park" festivities. Which really meant walking with my aunt to see her beer drinking friends and socializing with them. Which was pretty boring to a kid.

After swimming, the bbq, ice cream making and hanging out with the whole family we'd wait around for it to get dark so we could watch the fireworks. The city set off the fireworks at the high school (they still do) and Grandma's house was only a couple blocks away. So we'd set up our chairs in the back yard. We'd usually have a blanket. Someone would get up on the roof (never me I was too afraid to get up there). Grandma would be freaking out about her dogs freaking out so she'd be putting them in the bathroom or bedroom or something. (she had a lot of dogs while I was growing up and one of them always wanted to kill one of the other ones)

So we are all in position for the fireworks. There is some bantering back and forth between my aunt and my uncle. ALWAYS. Because they would always drink too much and that would loosen their tongues and they would just let it out.

Finally the fireworks start. And as usual we all have to move around because "that tree" is in the way. "Next year Grandpa needs to cut that tree down". When the fireworks are just about over we run in the house and get everything ready real quick, throw everything in the car and take off before the "mad rush" of all the traffic coming from the high school. I don't know why we didn't just wait half an hour to leave but we always had to hurry hurry!

Since my Grandma died and WWIII broke out between my mom's siblings the 4th of July just hasn't been the same. We always try to come up with our own traditions but so far nothing has really stuck. This year we all slept through the big hot air balloon lift off, pancake breakfast and parade. We are going to go over to our friend's house to go swimming and bbq and then later we will go sit out on the side of the road in front of a church and watch the fireworks.

It's not the same without the old traditions but maybe some day we will find our own.Pin It
Posted by Julie H at 9:48 AM

Happy 4th Of July to you and your family. Have fun and be safe - Kellan

Wow, I'd love to live somewhere where you get PAID to drop off your garbage!!! Imagine how rich I'd be with all my diet coke bottles!!!! Thank you for you supportive comments over the past week chick. Stew and I really appreciated it. HUGS to you.

Hi Julie! Thanks for stopping by. When I first clicked on your site and saw the trash, I was thinking, "Oh this is gonna be good." I am very impressed that you got that big ole pile all tidy and actually got money for it! And I enjoyed taking a walk down your July 4th memory lane. Isn't it funny how when you are little, going to grandma's sometimes seemed like torture, but when you are older they are some of your fondest memories. Fun post...trash and all ;)

I'm glad to say that my recycling does NOT look like that anymore. Gosh that's embarrassing!

AND now that I'm back working it ALMOST looks that bad again!