We have been home from camping for about 3 hours now. I let Jessica have the first hour on the computer because I bribed her to open the tent for her dad last night lol. I so didn't want to get up to unzip it so he could put a sleeping Trevor to bed.

I've been reading blogs. I WAS reading blogs. I just accidentally hit MARK AS READ on ALL my blogs on Google reader. I'm slightly pissed at myself but I guess I just saved myself hours of reading! I'm sorry but I will just have to catch up once you post again!

So how did camping go?? I think I'll split it up by days since we were gone so long and I wouldn't want to leave anything out!

So the plan was to meet up at Target by the freeway at 9:00. We pulled out of here at about 8:45, stopped at our corner store and got a roll of quarters for the showers (MUST take showers when camping for 5 days!) and ice for the ice chests. Then we stopped off at the bank to get some cash. I tried not to look at my balance on my receipt. It's getting a little low since I am getting tiny paychecks from unemployment. I guess they think if they don't give you much you will go look for a job or something?? Anyways.. we got there and were the last to arrive. Everyone was hanging out in the parking lot chatting. My friends each with their nice trailers they were pulling and us with our new $40 tent tucked in the back of the pick up. While everyone is standing around Scott picks this time to check the oil, which if course is down a quart (would have been nice if he could have done that BEFORE we left). So we started off the trip by borrowing a quart of oil.

By 9:30 we were off! By 9:45 we were pulling off the freeway after the first car's bungee cord fell off. We were all sitting on the side of the road while they checked their load of bicycles. Of course we were the end of the line so we were sitting there going WTF?? Why are we sitting here!! Let's get the show on the road already!!

Ok back on the freeway. 10:15 and I have to pee so bad. I've been waiting for a kid to start complaining but for some reason they are all fine. Guess I shouldn't have downed that bottle of water already. I text everyone and ask if anyone else has to go potty or just me?? Next thing I know we are pulling off for a pit stop. Wow at the rate we are going we might get there next month!

No more water for me until we get a little closer to stopping! We drive all the way to the big turn off from the major highway and stop at a gas station so the SUV driver and the big pick up driver can refuel. (One more reason not to pull a big trailer) We text them and tell them we will meet them over at McDonald's for lunch. This McDonald's stop is our tradition every time we go camping in Lake Tahoe.

We get our usual tables outside and munch away then back on the road for the rest of the ride which really doesn't take too long at all. Although by this time Trevor is doing the "are we there yet?" over and over.

We pull into the campground and Scott is freaking out that he has to make a "pit stop" like NOW. We are about 10 cars behind our friend that has the actual reservation so I get out and run to the front of the line and pay for our extra car. That way we were able to go around the line (maybe that wasn't nice?) and head for the potty. Scott gets out of the truck, leaves his door open and goes into the potty. Kids get out. I'm sitting there reading my book and realize that everyone has walked down to the campsite to meet up with our friends. I was a bit annoyed that I was "left behind". Guess that was kind of dumb when I look back on it though.

I pull out my purse and walk down to the campsite. Scott eventually gets the truck and we start unloading everything. When it comes time to put the tent up I offer the suggestion of turning the tarp so that we can walk on the extra tarp before getting in the tent. I'm told that he can do that AFTER he gets the tent up since it's a "dome tent" and he can just turn it. I of course think this is stupid but instead of arguing go and get my camping savior

and sit and watch the show. 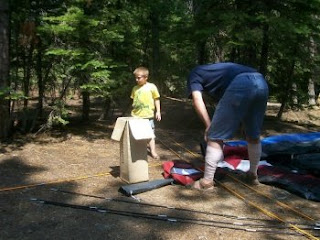 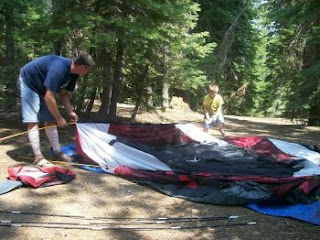 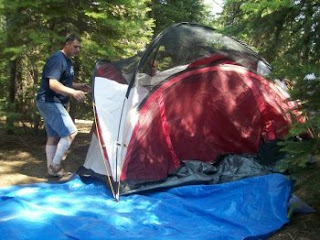 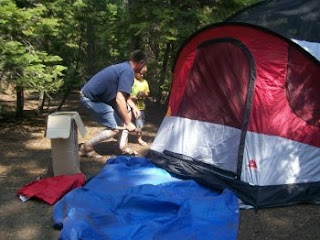 After our friend A comes over and helps finish getting the tent put together he tells me to come move the tarp. I was like oh HELL NO! (pretty sure I said that too lol). Because really it wasn't too easy to hold up a tent AND move the tarp around! Guess I'm not so stupid after all!

The new tent is pretty nice but the rooms are a joke. The "walls" are just thin pieces of fabric that just hang there and make the tent way too claustrophobic. I took them down right after I put them up. Also with air mattresses it was more like a 5 person tent if you don't have too much stuff or want to walk around. It was just right for 4 though (Jessica was sleeping in a tent with all the older girls).

After the tent was up we sat around a bit and then my friends D and her husband T made dinner. They got Carne Asada from the local Mexican grocery store. OMG it was soo good! Could have used just a bit more spice but it was really great. Easy to make too since it was already seasoned and they just had to BBQ it and heat up the tortillas.

After cleaning up dinner it was s'mores time. The highlight of every kid's camping experience. Although after the first time of Trevor having a marshmallow on fire and swinging it around fanning the flame I was thinking maybe it wasn't such a good idea. Flaming object/fire/5 year old/hair/trees/forest on fire??? Not to mention I kept thinking of that scene in Dennis the Menace when Dennis flings the marshmallow and it lands on Mr. Wilson's head. After talking to him a bit and telling him PLEASE FOR THE LOVE OF GOD do not shake the flaming marshmallow around!! he finally got the hang of it lol. 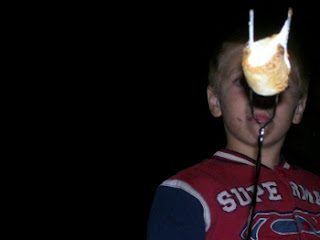 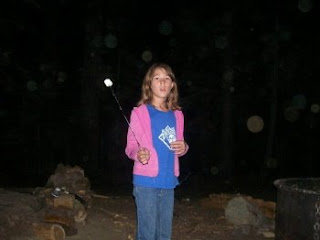 After about 3 drinks I was feeling pretty mellow. 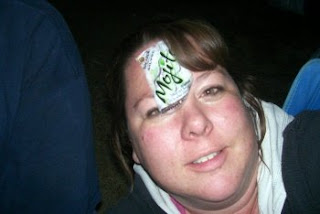 We went to bed pretty early. Apparently T saw a bear when he got up in the middle of the night to go out to pee (don't you wish you could pee in the woods like a guy without worrying about getting your feet wet!). The next morning we were all like WOW, a bear right here, right next to our tent. That's freaking scary!! Little did we know that wouldn't be the last of our Big Bear Experience of 2008...Pin It
Posted by Julie H at 6:49 PM

there is NO WAY I'd go camping anywhere where there could be bloody bears! Those buggers will eat ya given half a chance! *shudder* Glad you seemed to have fun, small tent an all!

That is one reason I won't go camping - bears. The other is I can't do without my luxuries, like a bathroom of my own!

WAIT!! That isn't the end of the camping story, right? I want to read more! You're freaking me out about the bear, too.....

I agree..as I am rolling here in laughter! I personally LOVE the Mojito photo the best...where is the rest of the story?? :o) Almost in tears laughing! Sarah

I'm such a wussy girly-girl. I haven't been camping since a horrible experience in the girl scouts at the age of 7. Peeing in the woods and bears are definitely two of my reasons for never going.